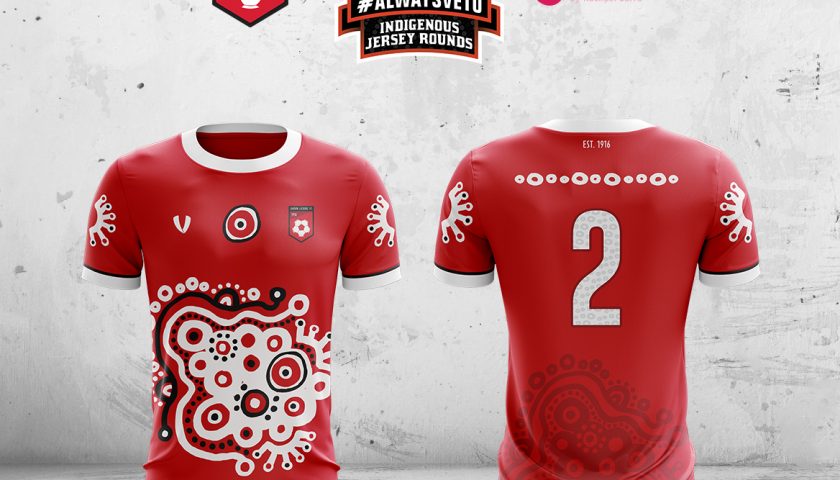 Rachael uses art as a powerful tool in storytelling to educate and share Aboriginal culture. Her style is feminine, fun and engaging but is strongly drawn from her heritage and her role as an Aboriginal woman in a modern world.

“The raw story of the artwork is unity at the centre of the team, all voices heard and respected, connected and stronger together,” Rachael said.

Bardon Latrobe club president Phil Cowlishaw said the committee is proud that the artwork has been developed and will later be used with junior players to educate and inform.

“I personally thank everyone who played a part in the creation of the artwork and I would like to especially pay thanks to the artist, Rachael Sarra, who is an inspirational Indigenous woman who undertook this journey to capture the essence of our story.

“The artwork will invite people to start a conversation and with the community in which we are a part.” Phil said.

The club will purchase kits for selected teams to wear and is available to buy now. The cost of the jersey is $40 which includes a donation to an Indigenous charity as chosen by Rachael.

The National Aboriginal Sporting Chance Academy (NASCA) which works with Aboriginal and Torres Strait Islander young people to create a strength-based, culturally strong environment that ultimately results in Indigenous Australians realising a level of health and prosperity on par with other Australians.

Order your shirt below by completing the form and pay for your shirt with the PayPal link. All shirts cost $40.

Orders have now closed. You will be able to collect your jersey from the canteen. A limited number of adult sizes will be on sale at the canteen.