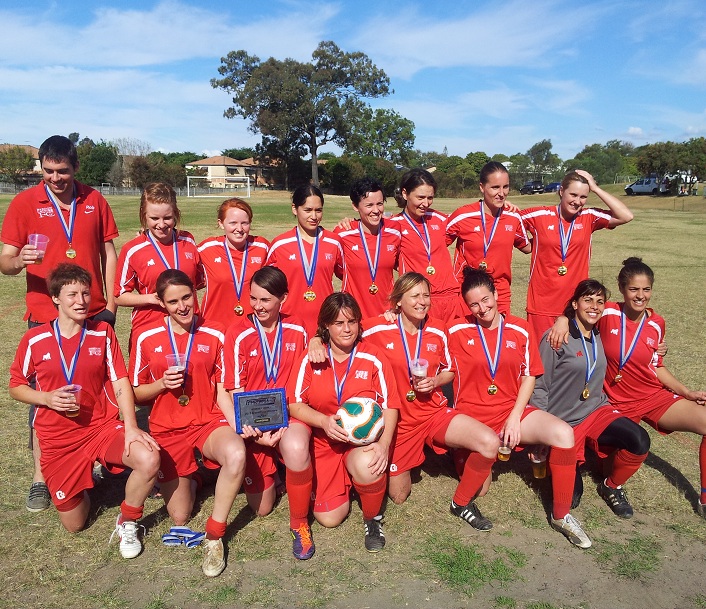 On a hot and sunny Sunday afternoon, the Bardon Latrobe Ladies faced off against UQ for the Women’s Division 1 Grand Final.  Having already claimed the Premiership, the girls were keen to finish the double to end their first year with our club on a high note.

With probably the largest Bardon crowd seen this season behind them,  Bardon took it to UQ from the start, though the premiership runners-up held their own and the match promised to be an arm wrestle.  It wasn’t however, until Kirrily sent in a scything centre ball to Anita who placed it beyond the keeper, that either team looked to have the upper hand.  A carbon copy play almost saw Anita double the lead but for the last minute lunge of the UQ defender.

Both keepers played well to keep their teams in the game with Rhiannon making some last ditch saves to maintain the lead.  Bardon seemed to dominate the last ten minutes as both teams started to droop in the heat and we had some last minute chances to seal the game, though the UQ keeper proved solid in goal.  The final whistle saw Bardon Latrobe win 1-0, and the Ladies broke out the champagne and enjoyed the well earned celebrations.

Each of the girls played out of their skin, but after lengthy deliberations, the ‘management staff’ awarded the ‘Woman of the Match’ Brisbane Roar signed ball to Bianca for an outstanding game in the centre of the park.

I know that everyone at the club congratulates our Women’s team and wishes them all the best for next season.