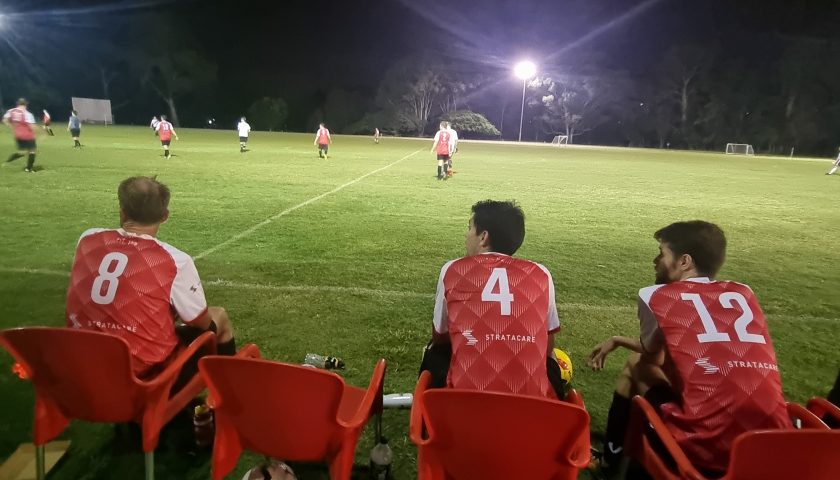 The annual Overs vs City club night returned on a balmy Friday evening at Bowman Park.

The curtain raiser saw a combined City 7 and O45s select take on the O35s Div5 team. A cagey affair was settled by Capital coach and habitual goal hanger Gilbert Albertson unable to miss from short range. He later proved he could miss from the spot but I won’t mention that.

Player of the game was the spritely Callum McLauchlan.

Next it was the turn of O35s Div3 vs City 6 and this one wasn’t as close. Tom McGuckin terrorising the City 6 team with a 4 goal haul in a 5 zip win.

The terrace was in full flow with Bardon family and players for the main event. A strong looking O35s Div2 side taking on a rejuvenated City 5.

Boasting returning Bardon favourites Ben Elliott and Flynn Moloney the City 5 side took the lead. But the Div2 team came back strong with debutant Daffyd Evans impressing with a hat trick, sealed with a penalty at the last, and a Wallington lob over a stranded Dale West.

Overall a City win 2 – 1 in games but football and The Third Half bar were the real winners.

The biggest controversy of the night turned out to be the Pirate Life Açai & Passionfruit Sour on tap. An opinion divider. Like Graeme’s personality, definitely an acquired taste.

A word for the volunteer referees Sierra McCaffrey, Rich Sharp and Steve Jones. Games don’t happen without referees and they all controlled the games with conviction.

The city boys claimed the final victory of being the last to leave the bar. Although the rumour that the Overs hit an undisclosed location in the Valley remain unconfirmed.