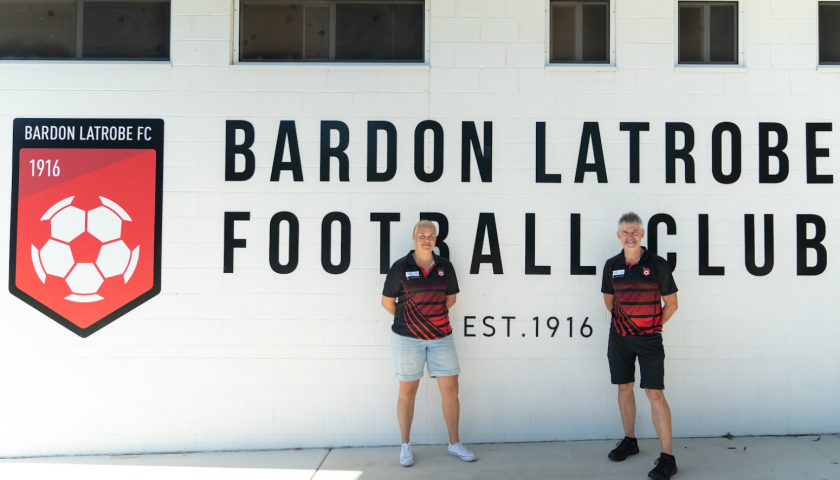 Bardon Latrobe Football Club is delighted to announce Zoe Bickerstaffe as the FQPL5 Head Coach for the 2022 campaign.

Zoe most recently coached in the NPLW at Mitchelton Football Club securing the team promotion to that level before securing the clubs position in the top tier.

She is an FFA C Licensed Coach and works as a marketing and communications manager.

Zoe said she was delighted to be taking on the FQPL5 role after meeting the committee and some members of the playing squad.

“I was in talks with the club the last time the position was vacant but it wasn’t the right time for me personally.

“I can now build on the excellent work of Gilbert Albertson and after meeting with the Bardon Latrobe committee and a core of the playing squad I was sure that Bardon Latrobe is the right club for my next coaching opportunity,” Zoe said.

Zoe was born in Honiara, capital of the Solomon Islands in the Coral Sea.

Her parents then moved to Cyprus, in the eastern Mediterranean Sea where she started playing football as a junior with the Ledra Nicosia club.

It was then to New Zealand for a university degree before she landed in Brisbane nearly a decade ago.

Vice-President (Seniors) Samuel Irvine Casey said that he is thrilled that Zoe was able to take up the coaching position.

“Zoe stood out in the interviews, as not only the most well qualified coach but she ticked the boxes in terms of personality and football philosophy. The extensive work on the football field this off season will give Zoe and the squad every chance to build on last season’s top 4 finish.”

“Last year was the centenary celebration of women’s football and Latrobe formed a proud part of those celebrations, honouring the women who played for the club at that time. It seems fitting to be the club to appoint Zoe.”

The full coaching set up will be announced in due course.

A pre-season program will begin in January.